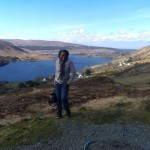 Though born in London, I grew up in Belfast.  We spent holidays in Atrium and also the Republic of Ireland.  This year I decided to go back to Ireland to race my roots.  I did not quite know what to expect.   Having grown up in care, growing up was a mixed experience.   A ‘who do you think you are’ experience can have very different outcomes, but you never know until you try.     It was so therapeutic.   It was definitely a worthwhile homecoming.

Nature or nurture?  I think it is both. Belfast and Donegal really reached me in a deep place.   As I connected with my childlike experience, there was a lot of healing going on.    When I work with organisations or groups, I encourage them to go back.  Going back to the beginning can help organisations and groups to be more aware of what makes them tick and be clear about their identity.  It reignites passion and the memories that can help the organisation, the staff, the volunteers and the supporters to connect when things get tough.  Returning to the beginning is not a luxury, it is a necessity, which can be energising, reinvigorating, strengthening and motivating.